Your chance to learn about planned cycling infrastructure (or the lack of) in the Guildford (Borough) Transport Strategy and ask the leading councillor questions.

Number count, so your presence is important.

Assume 60 to 90 minutes for the meeting.

There is secure cycle parking outside the chamber, if the fixed loops are full, chain up to the railings.  The Suffragettes did, and they got the vote.  Make yours count. Nine cyclists and three non-cyclists enjoyed a Tuesday-Friday ‘weekend’ (we’re nearly all retired these days) at The Bell House Hotel in Sutton Benger, near Chippenham in Wiltshire.  Here are a few of my photographs.  There are more (and larger) photos at https://www.flickr.com/photos/chris_jeggo/albums/72157695067222391. The Tithe Barn in Bradford-on-Avon and Angela riding past. A few pics of of our G3 team cycling the 2018 IOW Randonnée – a fantastic ride in glorious weather.  Sorry no pics of the G4s who were also well represented! 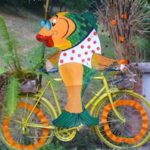 I was with Fleetcycling today and they have extended an offer to our club members to join in with Fleetcycling’s camping area at the Semaine Fédérale. There are 8 of us from Fleet including me.
The Semaine Fédérale is based in Epinal within the Voges region of France from 5 to 12 August. This will be splendid event with wonderful cycling routes for 7 days. We will camp/caravan/motorhome as group on the fédérale camp site situated 4 kms from the centre of the town.
If interested please contact Colin Waters
and he will register you with Fleetcycling or advise you what to do.
Please click here to read Paul Gillingham’s blog of last year’s event .
Bob McLeod
Back to Top

The G-BUG meeting scheduled for 17 April has been postponed.

Click here to read the Committee Report which was going to be discussed.