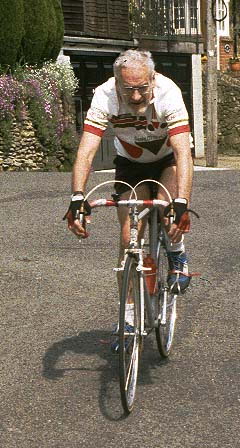 You can read here how Harold encountered the West Surrey CTC ‘Thursday Nighters’ in a pub in 1971 and soon afterwards joined the CTC. He became a mainstay of W Surrey District Association (DA) for nearly forty years, starting as secretary from 1972 to 1978, CTC Centenary Year, during which he organised the successful Home Counties DAs Rally in Godalming, something that previous DA Committees would have considered over-ambitious. In 1978 he became a CTC National Councillor, serving until 1984 (when he organised another successful Home Counties Rally in Godalming), remaining on the DA Committee during this period. At various later times he was also Chairman (4 years), President (5 years) and Vice-President (more than 20 years).

These facts, however, do not convey Harold’s overwhelming enthusiasm for all things cycling, and his knack of sweeping others along with him. Humour was an important item in his tool-chest, used to good effect when he edited the DA Newsletter for a couple of years, and later in DA Magazine contributions and speeches at annual dinners and other social events, plus all the usual banter on clubruns and cross-toasting at dinners. He was always enthusiastic about the Benstead Cup competition, competing, and highly placed, in many years, but a little disappointed to win it only once (but he was up against the likes of Russ Mantle and Clive Richardson). A competent event organiser, he was co-originator of our Tour of the Hills, which he organised several times.

Harold was good with his hands and machinery and took a pride in maintaining his stable of high quality clubman’s bicycles. He hand-made a collection of wire models of important machines in the evolution of the bicycle, plus the Thursday Nighters attendance trophy – a cycle leaning against a beer barrel. His Wooden Crank trophy is an accurate 2x model of a Campagnolo Super Record LH crank.

His interest in cycling history also manifested itself in a couple of slide shows he gave at the DA clubroom, which was started by Keith Parfitt and wholeheartedly supported by Harold. His shots of cycle tours and club life showed that he was right up there with the best photographers in the DA.

Amidst all this Harold found time to do some racing with, and contribute greatly to, the Charlotteville CC, as President, event organiser, archivist, etc. Take a look at their website.

Harold was good company and a good friend. He will continue to be sorely missed; sadly, the real Harold has been missed since dementia cruelly took him away from us about a decade ago. Our thoughts go out to his widow, Kath (his third wife and the widow of Keith Parfitt), and his son John.