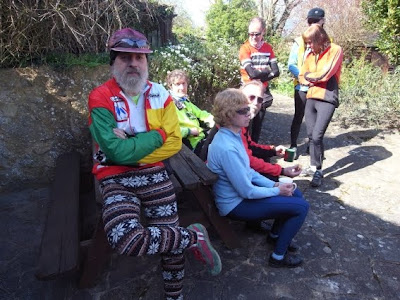 All completed the course, except one, with the first riders home completing the course in 3 hours 55 minutes, which, interestingly, was identical to the two previous years. It’s a fabulously scenic route, if a bit hilly. Fortunately the weather didn’t make our bicycles icy; in fact the sun shone out of a clear, sunny sky, although a couple more degrees up the celsius scale would have gone down well.

The picture above shows a few of us relaxing after the ride. That’s Mike Batchelor in the foreground, who won the CTC Tourist Competition last year – a great achievement requiring considerable dedication over the whole season.