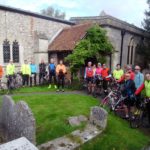 This was a great ride, planned by Phil, which started and finished at Micheldever. It was great to cycle outside of our usual area, particularly when the route was so good….. and so quiet! There was very little traffic and what a pleasure that was! Below are some photos including one in the churchyard of St Peter’s parish church in St Mary Bourne; we stopped there for a moment to focus our thoughts for a few moments on Ron Richardson, whose funeral was today.

We were a large group of 18 people for some of the ride. A couple of our number got stuck for well over an hour in a jam on the M3, following an accident, on their way to the start of the ride, so they didn’t join us till later on the ride. Other than that, the day went smoothly enough and in fine cycling conditions. The pub wasn’t bad either. Near the summit of Walbury Hill In the churchyard at St Mary Bourne 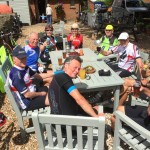 Your scribe, together with John Child and new member Alec Mackenzie, rode over from Godalming to meet the group at Mytchett at the very agreeable coffee shop at the Canal Centre. It was by no means the biggest assembly of recent weeks, no doubt partly because the Group 4 riders decided to have coffee at Seale. It was good to see Roger there – obviously on the up and up following his broken femur, Helen, the Tanners, Sue, Chris Jeggo, Rico and Russ, to name but a few.

Phil Gasson was doing the leading today and with minimum fuss or delay, other than bumping into two fully laden Dutch cycle tourists who one simply had to exchange a few words with, we set off on what was advertised as being a long but fairly flat ride into an area not often visited, namely the area south of Reading – sort of Berks / Hants border country. And, after an easy, brief and uneventful ride through Farnborough we were out into the lanes. Thanks to Phil for clearly doing some useful re-connoitering prior to the ride; we even tackled a longish stretch of track at one point although I’m not entirely sure what we avoided by doing this, but it made for a pleasant diversion and added variety.

The lanes were lovely and very scenic and the route even included an uncrossable ford – well, not if you were prepared to go in up to your thighs – but Phil had studied Google Maps and found a bridge some 75 metres up river which we crossed by. And no, Laurie hadn’t just waded through whatever he might want you to believe!

The Coach and Horses at Rotherwick provided a very satisfactory lunch with people choosing either a baguette or baked potato for about £6 a head which was reasonable. Even better, Laurie had a birthday last Sunday and bought us all a drink – cheers, Laurie!

After lunch it rained: well, it’s England and it’s July so what else can one expect! Clearly John and Neil didn’t expect because they hadn’t brought rain jackets – you won’t do that again, will you, chaps! Anyway, it wasn’t too bad really but enough for a wetting. Nevertheless it had cleared up by the time we got back to Farnham via lots more lovely lanes. Our route actually reversed some of the 1st stage of that well known West Surrey Audax ride, the Stonehenge. Once in Farnham, which is getting horribly busy these days, the group started to disassemble in order to go their separate ways home.

As always it was good to have the company of two ladies, both relatively new to the group: Susie and Alison – hope I’ve got the names right. Alison is a refugee from the Charlotteville where, she says, they don’t look after their riders so well on club rides: well, you’ve come to the right place for serious TLC, Alison. Susie joined after meeting Louise and is training hard for a Seattle to Boston adventure in September / October: wow – a 4,000+ mile wow!

Here’s a picture of the route and a link below to Strava for full details: