Following the excellent trip round the Isle of Wight which was marred only by the fact that I was riding my lovely, but slow Bike Friday, with the weather looking promising I decided to take the Eddy Merckx out for its first long ride, in order to try and redeem myself on the speed stakes. Frankly I don’t like people having to wait for me on rides and they had to do a lot of that on the IoW! Not so today, I’m glad to say.

Nine of us gathered at Guildford Station and it’ll hopefully teach me a lesson that I didn’t record the names of everyone in the group. Those whose names I can remember are Clive Richardson, Martin Vinson, Chris Boggon, Tim Bar, Peter Hackman, Mark …(?), two others who sadly have to remain nameless and myself. 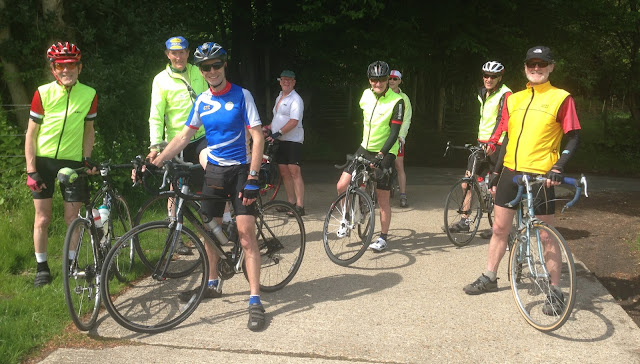 Leader Clive, who’s a fit guy, started by taking us directly to Leith Hill which we ascended, followed by a drop down the south side from where we continued east, crossing the A24 to arrive for coffee at the Farm Shop in Newdigate.

The lunch stop was a long way away at the RSPB place just south of Pulborough, and took us several hours to reach.

About mid-way between coffee and lunch we passed a group of riders going the other way and I was surprised to hear my name called out. It turned out that it was Brighton CTC and Tony Green took the photo above as we were passing.  Good to see you, Tony – sorry not to stop but we were on a mission. 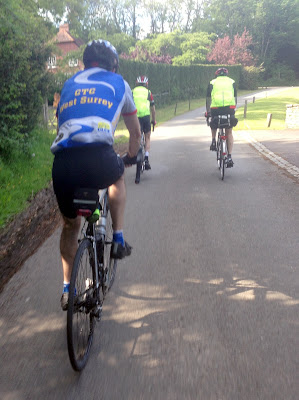 Following a late lunch at RSPB Wigginholt, it was time to head north and homewards. This is a shot featuring Martin modelling one of our great new cycle tops. We weren’t very impressed at Kirdford Stores when they said we were too late for tea, but we stopped nevertheless for a rest and a snack.
Overall it was an excellent ride of about 80 miles. Many thanks, Clive, for choosing the route and leading the ride. 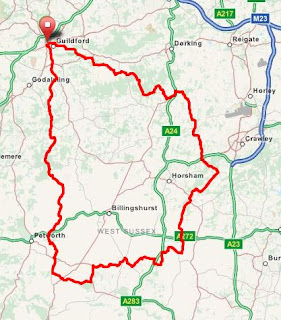