New Chairman’s Message (from the AGM) 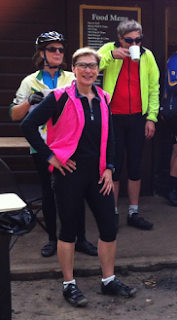 Louise Gagnon, our new Chairman, gave a lengthy and most impressive speech at our recent AGM and it’s been suggested that people might like to hear it again (or read it), so here it is.

Chairmanship CTC West Surrey – Manifesto to AGM 2 Nov 2013
Good morning everybody!
As we all know, a very important part of a Chairperson’s mandate is to provide a focus, a sense of future direction for the activities of the club. So I set about consulting with as many of you as I could, I must have spoken to at least 30 or 40 members, always asking the same 3 questions: where does the club need to go? What do we need to do less of, do more of. I then put all the answers in a big sieve, added my own views, and selected 5 straightforward objectives. So please sit back and let me spend 10 minutes describing where I think our Club should be going.
First of all, a bit of a review of where we are: Regarding our bread and butter which is essentially getting out on our bikes to play, Club members are simply unanimous: we have a fantastic rides and events programme… and it is delivered by a team of totally committed and competent Ride Leaders and Event organisers. In turn, these are supported by an equally committed and hard-working Club Committee who actually runs the Club on our behalf – and they do this very well indeed. What’s not to like about that? No wonder Club members are happy! And so I suggest that Objective #1 be to continue improving on what we do very well. … Already there are rumours that 2014 will include night rides, along with the return of breakfast rides and Tuesday evening Summer rides. A lot of good initiatives – so it’s looking good!
By Mark Waters on 18 November, 2013   /   Blog posts